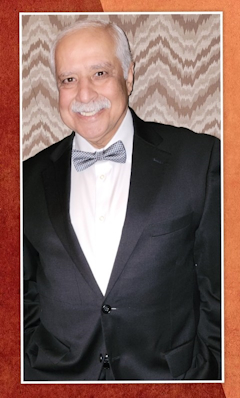 In 1996, he received Microrim's Award of Professional Excellence. In 1997, he was recognized as a Certified Ambassador Developer. He wrote many articles for Microrim's technical journal, The R:BASE Exchange.

Originally a medical doctor and resident surgeon from Pakistan, Razzak had his sights set on practicing surgery, but he returned to school and received his M.P.H., Masters in Public Health in Health Services Administration, from the University of Pittsburgh in 1984.

While attending the Graduate School of Public Health at the University of Pittsburgh, he began preparing his thesis. Research for his thesis involved the collection of biotechnical data about AIDS patients. He needed a database to collect and store his data so he called the Graduate School of Public Health Dean's Office and they told him to look at R:BASE or dBase in their data center. He chose R:BASE 4000, because he liked the way the box looked compared to dBase. He began his project and within 4 months, he had created an application, collected his data and finished the thesis. In the process, he discovered that he enjoyed the database work more than the research. He was so proud of his final application that he wanted to show it to somebody at Microrim. That somebody turned out to be Wayne Erickson, the creator of R:BASE. As a consultant, Razzak began creating applications for clients using R:BASE and lost interest in the practice of medicine. Eventually, he gave up his goal of practicing medicine in favor of full time R:BASE development work.

Keeping up with today's ever-changing technology and incorporating R:BASE to provide a total solution for current needs has always been a challenge on which he thrives. Implementing R:BASE and Oterro with PHP (R:WEB Suite), R:WEB Reports, R:WEB Gateway, and custom designed R:BASE Client/Server applications has been Razzak's latest solution to the R:BASE community. In April 1996, his first solution using R:BASE and Oterro was the on-line Ticketing System for the University of Pittsburgh Athletic Department.

On March 13, 1998, Abacus Software Group closed the doors on R:BASE. Razzak acquired the R:BASE products and intellectual property in June of the same year, and a new corporation was formed in Murrysville, PA. R:BASE Technologies, Inc. is currently celebrating its 18th Anniversary.

In addition to managing R:BASE Technologies, Razzak's client base consists of local clients, educational institutions, local, state and federal government agencies. His R:BASE professional consulting services extend worldwide, and his R:BASE hands-on training seminars have traveled all over the nation and the world.

Razzak has received many national awards including Who's Who Among American Business Leaders and as an Honorary Deputy of a Government Law Enforcement Agency. He is proud to have served as Chairman of the Project Bundle-Up Committee, and is a past member of the Advisory Board and Executive Committee Salvation Army of Western Pennsylvania. In 2010 he received the Outstanding Commitment Award of the Year by the Salvation Army and Project Bundle-Up, in association with ABC affiliate WTAE-TV Pittsburgh, PA for his many years of service. He also served as a member of the Y2K Committee for the Municipality of Murrysville, PA.

Razzak is an avid traveler and loves to visit new places around the world and experience unique cultures and activities accompanied by his family.

His wife Donna and son Rafee (a graduate of Carnegie Mellon University, with double degrees in Electrical & Computer Engineering and Computer Science, currently working as a software engineer in Silicon Valley) have been the biggest supporters of his everyday adventures.